In 2001 the Danish Institute commenced a large scale archaeological field project in ancient Kalydon in Aitolia. Kalydon is located around eight kilometres as the crow flies from Chalkis, on the west side of Mount Varassova in the direction of the present-day capital of Aitolia, Messolonghi. The project was directed by the Institute’s former director, Dr Søren Dietz in collaboration with Maria Stavropoulou-Gatsi and Ioannis Moschos from the ephorate in Patras. The project was later transferred to the new administration in Messolonghi with Maria Stavropoulou-Gatsi as ephor. The present excavations at Kalydon is a cooperation between the Institute and the 36th Ephorate of Classical Antiquities in Mesolonghi, and co-directed by the ephor Olympia Vikatou and former director of The Danish Institute, Rune Frederiksen.

Kalydon plays a considerable role in ancient mythology as described in Homer’s Iliad. For that reason, the important Sanctuary of Artemis Laphria outside the city walls and a so-called Heroon/palaestra, were excavated by the Danish archaeologist Frederik Poulsen, the Greek archaeologist Konstantinos Rhomaios (for the Archaeological Society in Athens) and the architect Ejnar Dyggve, during the years 1926 to 1935. The new investigations are thus a continuation of an earlier Danish/Greek cooperation, this time with focus on the town itself.

As early as the first year, however, a certain amount of resources were spent on the examination of an installation outside the city itself, a structure on the south slope of the Sanctuary of Artemis Laphria, which came to light in the wake of the construction of the national road in the 1960s and was preliminarily published as a Bouleuterion, or town hall. The excavations showed that the construction, at any rate in Hellenistic times, was a theatre with a rectangular orchestra, accommodating some 5000 spectators. Excavation of the structure was resumed as a cooperation from 2011 onwards.

Various methods were used in order to examine the town itself. In the first year, a surveyor initiated the topographical measurements of the city, the fortification walls and the visible remains of terrace walls and buildings. The town inside the walls was surveyed by a team of students, who collected and counted the objects from the surface – pottery, tiles, metals, loom weights, etc. – while two Russian geophysicists carried out geomagnetic surveys during several campaigns, with excellent results. Finally, excavations concentrated on a peristyle building which was partly excavated, and a tile kiln situated in the so-called Lower Town. Larger sections of the remains on the Acropolis were excavated and a small-scale survey of the Central Town gave indications of the use of the habitation quarters. Geological surveys determined the position of the ancient coastline which appears to have been more than a hundred metres further out than today, and also established that today’s fertile land between the sea and the town was, in antiquity, occupied by lagoons.

The town within the walls comprised an area of approximately 35 ha (350,000 m2), of which ten percent is occupied by the Acropolis. The investigations gave a good picture of the town in antiquity and of the function of the various quarters. The most important building in the Lower Town was probably the peristyle building with its colonnade and courtyard where athletic games took place. In a room in one of the corners of the building, a cult of the Anatolian goddess Cybele was established. Findings of a marble sculpture, incense burners, clay figurines and lamps indicate the function of the room. The objects were found almost as they were left when the roof collapsed around the middle of the 1st century AD. On the Acropolis a shrine was already established by late Archaic times, in the late 6th century BC.

Presentation of the project at the Carlsberg Foundation’s web site

A Danish archaeologist finds archaeological evidence for the existence of the Bronze Age city of Kalydon in Aitolia described by the famous poet Homer in his Iliad, the story of the Trojan War.

The project Rediscovering Artemis. A comprehensive re-examination of the Artemis Laphria Sanctuary in Kalydon carried out by archaeologist Dr Signe Barfoed, supported by the Carlsberg Foundation and hosted by the Danish Institute at Athens, aims to re-write the history of an important sanctuary of the goddess Artemis in the ancient Greek city of Kalydon in northwestern Greece (Fig. 1).

The city of Kalydon is mentioned several times in the poems of the two earliest European poets Homer and Hesiod and was the setting of the famous story of the Kalydonian boar-hunt, which involved heroes from across the ancient Greek world. According to the story, King Oineus of Kalydon had neglected to make offerings to the goddess Artemis, and in her wrath the goddess sent a monstrous boar to ruin the countryside of Kalydon; the boar destroyed crops, uprooted trees and killed people in its wild rampage. A group of Greek heroes led by prince Meleagros made an expedition to kill the boar. The expedition was successful, but afterwards a fight broke out about who were to keep the trophy of the boar’s tusks and the hide. Bronze Age Kalydon, which Homer portrayed as the seat of king Oineus, has until now remained undiscovered despite decades of archaeological investigations. The legend of the Kalydonian boar-hunt has been depicted in art throughout antiquity until today. One of the earliest representations is in a Greek vase painting dating to ca. 570 BCE (Fig. 2).

The archaeological explorations of the ancient city were begun in 1926 by a Danish-Greek collaboration between the then director of the Ny Carlsberg Glyptotek in Copenhagen, Frederik Poulsen and the renowned Greek archaeologist Konstantinos Rhomaios. This collaboration resulted in three scientific publications, but much archaeological material remained unstudied.

In 2017 Barfoed spent months in the storerooms of the National Archaeological Museum in Athens going through thousands of archaeological finds from these old excavations carried out in Kalydon, which had never been studied. Here she discovered exceptional finds that shed light on this very important early period of Greek prehistory. Among the finds are c. 125 ceramic vessels, especially drinking cups and mixing vessels, dating to the Greek Bronze Age that attests to feasting activity in Kalydon.

In the Mycenaean culture of the Greek Bronze Age large-scale feasting was a very important social event for kings and aristocrats, which took place in an impressive royal dining hall called a megaron. In Homer’s Odyssey such feasting is described by king Odysseus: “For myself I declare that there is no greater fulfilment of delight than when joy possesses a whole people, and banqueters in the halls listen to a bard as they sit in order due, and by them tables are laden with bread and meat, and the cup-bearer draws wine from the bowl and bears it round and pours it into the cups. This seems to my mind the fairest thing there is." (Homer, Od. 9.5-11).

Through a careful re-examination of the old excavation diaries, handwritten in German, from the 1926 excavations in the Artemis sanctuary, Barfoed has been able to identify the exact findspot of the Bronze Age finds. The feasting equipment was found near the architectural remains that resemble other known Bronze Age buildings identified as a megaron. This structure existed prior to the construction of the Artemis Laphria sanctuary and is the only Mycenaean structure found in Kalydon so far (Fig. 3).

The discovery of the Mycenaean pottery means that Kalydon now can be counted among the sparse Mycenaean settlement sites in the region of Aitolia, an implication that will change the history and perception of Bronze Age Greece. This is the first archaeological evidence to prove that a city actually existed in Kalydon in the historical period that Homer is describing. The finds might even be the actual drinking cups belonging to the king of the settlement of Kalydon. 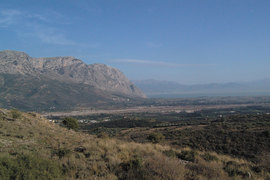 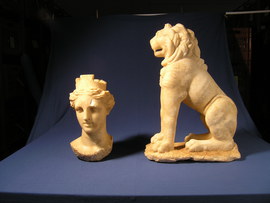 Marble sculpture of the Anatolian Goddess Cybele and a lion 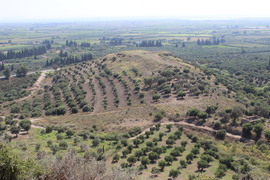 Fig. 1: Photo of Kalydon with the Artemis Laphria sanctuary plateau in the foreground (Photo © K. Winther-Jacobsen)