The Danish Institute at Athens has been entrusted with the complete personal archive of the Greek poet, lyricist, playwright, and author, Dimitris Christodoulou.

Dimitris Christodoulou was born in Athens in 1924 and passed away on 4 March 1991. He studied at the Drama School of the Greek National Theatre and also studied Political Science at Panteion University in Athens. During the German occupation he became a member of EAM (The National Liberation Front), and in 1944-45 was held captive for three months by the English in the “El Daba” camp in Egypt.

His work first appeared publicly in 1952 in the magazine Makedonika Grammata (Macedonian Letters), where his poem Nychtofylakas (Night watch) was published.

In the period 1967-72, Dimitris Christodoulou lived in Paris. He published 27 collections of poetry, 15 novels and five short stories, and wrote 13 theatrical plays.

He also made a vast contribution to the Greek treasury of song as a lyricist, writing some of the most important songs in the Greek repertoire, put to music by great composers such as Mikis Theodorakis, Stavros Xarchakos, Manos Loizos, Christos Leontis, Nikos Mamangakis, and Notis Mavroeidis, as well as Linos Kokkotos, Mimis Plessas, Giorgos Zampetas and Kostas Chatzis.

This catalogue is a guide to the contents of the archive. The catalogue, which is in Greek, is intended as a quick guide, and is divided into 13 categories:

The archive covers the years 1954-91, and is organized chronologically within each category. It consists of both typed (ΔΦ) and handwritten (ΧΦ) material (in bound books), photographs, LPs and electronic AV material.

The Archive is catalogued by Antonis Petrakos. 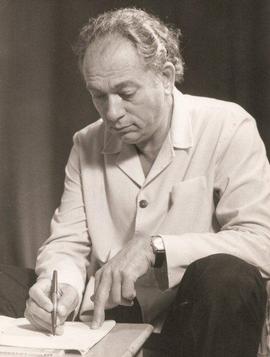